These UTs comprising many genes related to plant secondary metabolite biosynthesis, defense and stress responses. To validate our sequencing results, we analyzed the expression of 21 selected DEGs by quantitative real-time PCR and found a good correlation between the two analyses.

​The single time-point analysis in this work not only provides a useful genomic resource for P. minus but also gives insights on molecular mechanisms of stress responses in P. minus.
​
​Significance
In this study of MeJA-elicited P. minus leaf transcriptome, 182,111 UTs were assembled with 2,374 DEGs identified. The is the first RNA-seq study on the response to MeJA of a non-model plant from Polygonaceae family, which comprises many useful medicinal plants. Functional annotation of DEGs based on COG, GO and KEGG showed the upregulation of UTs involve in plant defense and protective functions, as well as secondary metabolic processes. Conversely, UTs related to photosynthesis were down-regulated. This is in accordance to the TF families found to be differentially expressed. MeJA elicitation is found to upregulate endogenous JA biosynthesis. The molecular mechanism on how MeJA triggers the upregulation of phenylpropanoid pathway is proposed and validated by RT-qPCR analysis. These results support the physiological trade-offs between stress response and growth despite that the underlying mechanism remains unclear. Furthermore, current P. minus transcriptome provides an extensive sequence resource for gene discovery and functional studies in related species.

MeJA treatment induced the upregulation of proteins involved in various biochemical pathways including stress response mechanism, lipid metabolism, secondary metabolite production, DNA degradation and cell wall degradation. Conversely, proteins involved in energy expensive reactions such as photosynthesis, protein synthesis and structure were significantly downregulated upon MeJA elicitation. Overall protein-transcript correlation was also weak (r = 0.341) suggesting the existence of post-transcriptional regulation during such stress. In conclusion, proteomics analysis using SWATH-MS analysis supplemented by the transcriptome database allows comprehensive protein profiling of this non-model herbal species upon MeJA treatment.
​
Significance
This is the first proteomics study on this non-model herbal species, P. minor particularly using an advanced proteomics platform called SWATH-MS, enriched with a previously reported transcriptome database for protein identification. This has enabled us to profile a comprehensive proteome coverage of 751 proteins, and forty were found differentially expressed. The modulated levels of these proteins suggest that the hormone invoked defense and recovery response but suppressed proteins involved in growth and development. Correlation analysis between our proteome study and previously reported transcriptome analysis suggests that post-transcriptional and post-translational regulation may have existed to regulate certain groups of proteins.

​Our results suggest that MeJA enhances the activity of biosynthetic pathways for aldehydes and terpenes in P. minus. Hence, the production of aromatic compounds in this medicinal herb can be increased by MeJA elicitation. Furthermore, the relationship between MeJA elicitation and terpene biosynthesis in P. minus was shown through SPME-GC-MS analysis of VOCs combined with transcriptomic analysis of MeJA-elicited P. minus leaves from our previous study.
​
Significance
This is the first study of MeJA-induced volatiles in P. minus leaves using an integrated metabolomic and transcriptomic approach, which leads us to a better understanding of exogenous MeJA elicitation on the production of P. minus leaf volatiles. The SPME-GC–MS study with multivariate statistical analysis illustrated time-course changes in VOCs that occurred after elicitation via data clustering. Our results indicate that MeJA elicitation appears to mainly affect the synthesis of aldehydes and sesquiterpenes compared to other classes of volatiles.
Therefore, the MeJA induction of volatiles in P. minus provides an opportunity for the discovery of genes involved in the accumulation of induced terpenes and GLVs, which are important for the characteristic pungent smell of P. minus. The present study also opens an avenue to conduct further investigations into gene-metabolite networks, targeted enzyme analysis, and biotechnological applications.

Polygonum minus Huds. is an aromatic plant with potential anti-inflammatory, anti-ulcer and diuretic properties. Although the volatile compounds from the essential oil of P. minus have been extensively studied, knowledge of the aroma-active compounds is still incomplete.
​
Significance
This is the first olfactometric study on the essential oil of P. minus, and it is important for our understanding of the biosynthesis of volatile compounds in this medicinal herb. Moreover, the characterisation of aromatic compounds that contributed to the potent odour of P. minus can be further applied in the flavour and fragrance industries.
​
Temperature is one of the key factors in limiting the distribution of plants and controlling major metabolic processes. A series of simulated reciprocal transplant experiments were performed to investigate the effect of temperature on plant chemical composition. Polygonum minus of different lowland and highland origin were grown under a controlled environment with different temperature regimes to study the effects on secondary metabolites. We applied gas chromatography–mass spectrometry and liquid chromatography time-of-flight mass spectrometry to identify the chemical compounds.
​​ 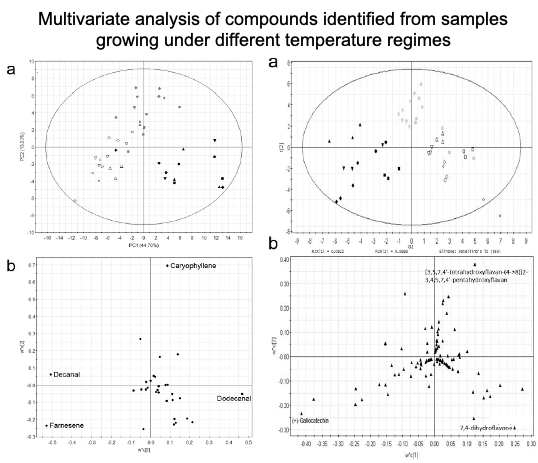 ​This study demonstrated that temperature had greater effects on the composition of VOCs than flavonoids, which was varied according to different populations. This knowledge is useful to inform cultivation conditions and choice of P. minus population to acquire plants producing desired flavonoid compounds. Furthermore, this study also implies that the effect of climate change on natural plant populations will be significantly varied and modelling of plant responses should include biogeographical distribution.

Fourier transform infrared spectroscopy was used to characterise highland and lowland populations of Polygonum minus Huds. grown in different controlled environments. A thermal perturbation technique of two-dimensional correlation infrared spectroscopy (2D-IR) correlation spectra was applied to establish differences between the populations.
​
​Significance
FTIR is a rapid screening method that can be applied to identify the chemical compositional difference between plant samples. P. minus plants from different populations which were subjected to different temperature treatments can be discriminated by IR spectra according to the position and intensity of peaks, based on the tri-step identification+ IR, secondary derivative-IR and 2D-IR correlation spectra. In the temperature treatment experiments, the higher temperature treatment resulted in signs of increasing carbohydrate, terpenes, amide and flavonoids, which were apparent in highland populations of both freeze-dried and flavonoid samples. Hence, the production of desired compounds could potentially be boosted by controlling the temperature conditions of plant cultivation. Terpenes and flavonoids are the major compounds in P. minus, as it could be assigned as a marker for the temperature changes especially in higher temperature. Furthermore, we can conclude that highland P. minus plants generally produced certain secondary metabolites in greater abundance than that of lowland plants. 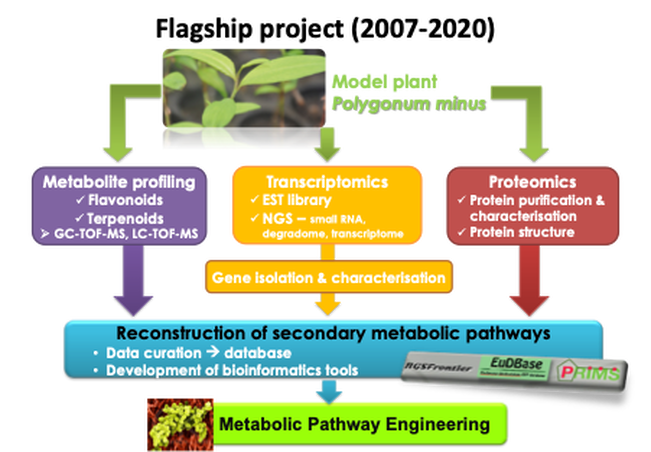 Systems to Synthetic Biology Research Framework of Kesum
​Significance
Two new sesquiterpene synthases, PmSTPS1 and PmSTPS2, which were identified from P. minus leaf transcriptomics analysis, were cloned and characterised. Both of the enzymes produced industrially important acyclic sesquiterpenes, β-farnesene, α-farnesene, and farnesol. PmSTPS2 also produced nerolidol as the major product from FPP conversion. This study demonstrated the production of P. minus characteristic fragrance-related sesquiterpenes, by both PmSTPS1 and PmSTP, as well as the potential of further metabolic engineering in E. coli, using PmSTPS2 for the microbial production of nerolidol.
Rapid assembly of yeast expression cassettes for phenylpropanoid biosynthesis in Saccharomyces cerevisiae

​In this study, a homology-based isothermal DNA assembly method was carried out for one-step simultaneous assembly of multiple DNA fragments to engineer plant phenylpropanoid biosynthesis in Saccharomyces cerevisiae. Rapid construction of yeast plasmid harboring dual gene expression cassettes was achieved via isothermal assembly of four DNA fragments designed with 20 bp overlapping sequences. The rate-limiting enzyme of phenylpropanoid pathway, cinnamate 4-hydroxylase encoded by C4H gene from Polygonum minus was cloned in tandem with yeast promoter and terminator elements of S. cerevisiae for efficient construction of phenylpropanoid biosynthetic pathway in recombinant yeast. The assembled pAGCAT (C4H-ADH1t-TEF1p) shuttle plasmid and transformation of S. cerevisiae with the plant C4H gene were confirmed via PCR analysis. Based on these findings, the yeast shuttle plasmid harboring P. minus phenylpropanoid biosynthesis gene was efficiently constructed to be the starting platform for the production of plant natural products in genetically engineered S. cerevisiae.
​​ 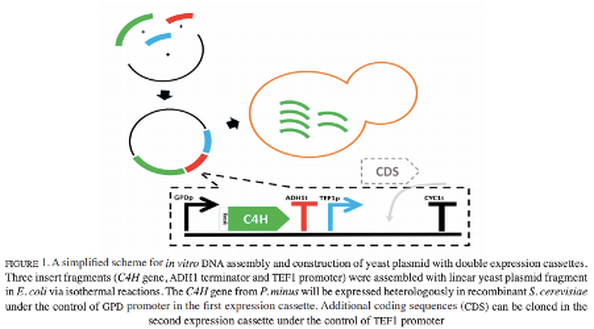 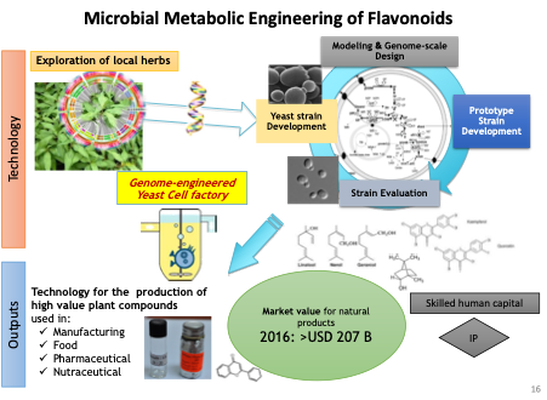